The staging of Giuseppe Verdi’s La Traviata has strong ties to Venice ,where it was performed for the first time at the Gran Teatro La Fenice on March 6, 1853. “Musica a Palazzo” follows the “directions for contemporaneity” requested by Verdi at the first performance (which caused a scandal by its brazen realism). The first act begins in the Portego (central hall) where the spectators are astonished to realize that they themselves are playing the role of the guests of Violetta (Traviata) as she drinks to their health and, together with them, sees Alfredo again. The second act takes place in the Sala Tiepolo, whose beauty and intimacy are the perfect setting in which to appreciate the subtlety of the “interior dialogue” of the character and to be moved by her conflicts. The drama of Violetta’s illness and death is consummated in the Camera da letto (bedroom with alcove), and not even the extraordinary 18th-century stuccos can divert attention from the emotional intensity of the music: the voices of the singers, in close intimacy, resonate in the heart and soul.

During the intermission, in the unique setting of the rooms that overlook theGrand Canal, guests can enjoy free high-quality Prosecco, soft drinks andliqueurs offered to them.

Rigoletto is an opera in three acts by Giuseppe Verdi. It was first performed at La Fenice Theatre in Venice on March 11th, 1851. (Note: limited seats available) 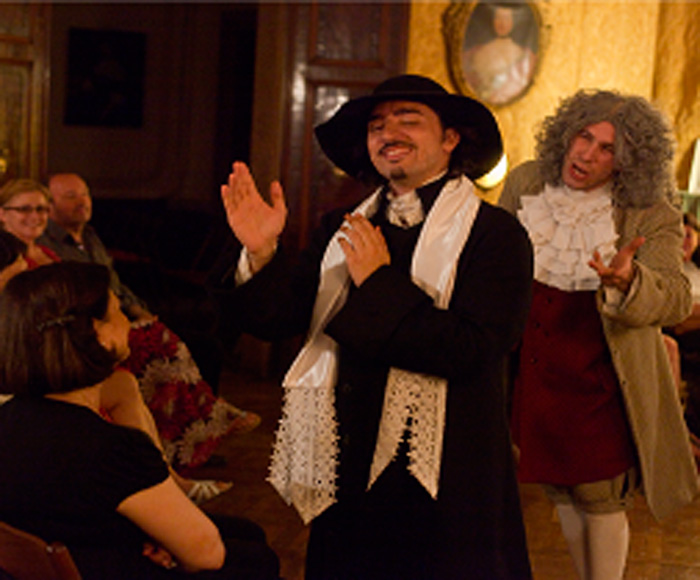 "The Barber of Seville", the famous lyric opera by Gioacchino Rossini with libretto by Sterbini, based on a comedy of the same name by Beaumarchais. (Note: limited seats available)